LISA Pathfinder: Science payload completed and integrated into the satellite 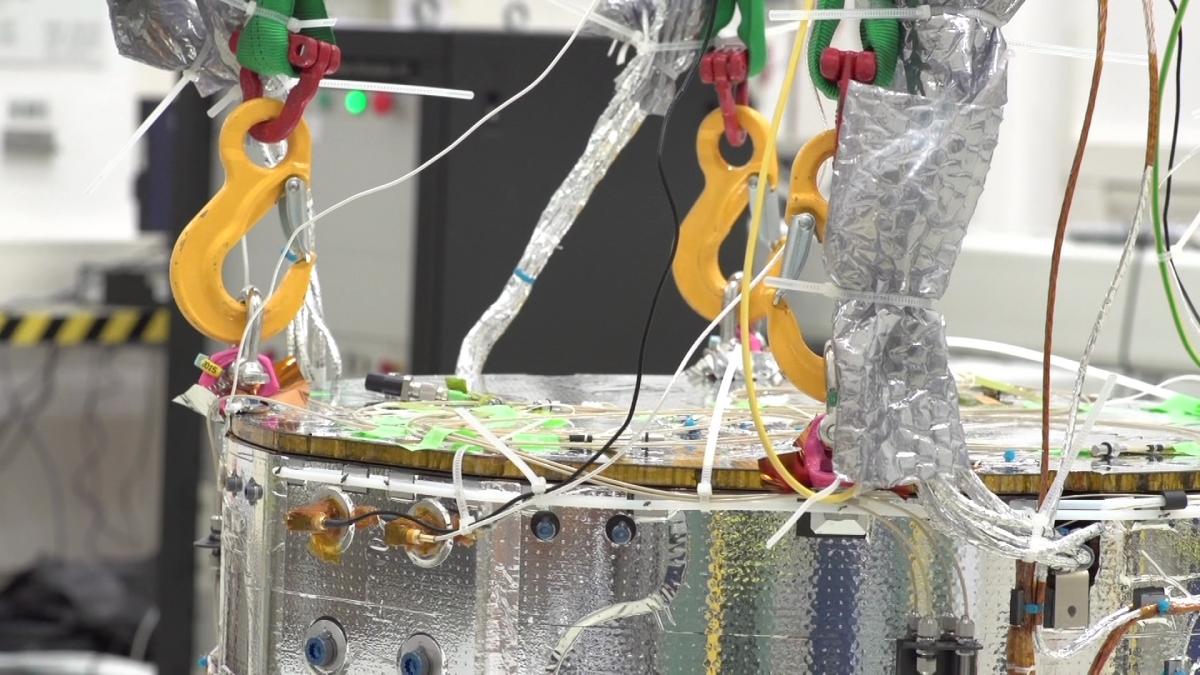 Next steps: Shipment to Kourou and launch in autumn

After more than 10 years of intense development, the highly sensitive scientific payload of the LISA Pathfinder Mission (LPF) was now completed and integrated into the satellite. The science instruments are the core of the mission.

While the LPF scientists continue preparing for LPF mission operations, the industrial partner Airbus DS supervised by the European Space Agency (ESA) is running the final tests on the assembled spacecraft. Shipment to the ESA spaceport Kourou in French Guyana is planned in August and mission lift-off on a Vega launcher in the autumn. The mission operations phase will begin once LPF has reached its destination: for a period of several months the scientist will test the high-precision science instruments on board while maintaining regular contact with the satellite.

LISA Pathfinder is an ESA mission, with the European space industry and research institutions from France, Germany, Italy, the Netherlands, Spain, Switzerland and Great Britain as well as NASA participating.

The Max Planck Institute for Gravitational Physics (Albert Einstein Institute/AEI) in Hannover played a leading role in the development and construction of the scientific instrumentation for LISA Pathfinder. Joint scientific leadership is held by Prof. Karsten Danzmann and Prof. Stefano Vitale from the University of Trento, Italy.

The highly sensitive measurement system of LISA Pathfinder
Two identical cube-shaped test masses weighing about two kilograms each will be floating in their own vacuum containers fort he duration of the mission. They will be almost free of all internal and external disturbances and will thus allow the demonstration of the precise measurement of free-falling masses in space. A special gold-platinum alloy has been used for the masses, ensuring that magnetic forces do not have any effect. Using ultraviolet radiation, a contactless discharge system prevents any electrostatic charging of the masses. The caging and grabbing mechanism – responsible for protecting the test masses from intense vibrations during launch, releasing them in a highly controlled setting, and capturing them as necessary – is a particular challenge in this context. The laser interferometer will measure the position and orientation of the two test masses relative to the spacecraft and to each other with a precision of approximately 10 picometers (one hundred millionth of a millimetre). In addition, there are less precise cpacitative inertial sensors that also help determine their positions. The positional data is used by a Drag-Free Attitude Control System (DFACS) to control the spacecraft and ensure it always remains centred on one test mass. The actual position of the satellite is controlled through Cold gas micronewton thrusters originally developed for the Gaia astrometry mission, which have the capability of delivering propulsion in extremely fine and uniform amounts. The thrust generated is in the micronewton range – this equates to the weight of a grain of sand on Earth.

Paving the way for new astronomy
LISA Pathfinder paves the way for LISA, a large space observatory for the direct observation of one of the most elusive astronomical phenomena – gravitational waves. These tiny distortions of space-time were predicted by Albert Einstein. Their observation requires an extremely sensitive and highly precise measurement technology. Space observatories like LISA will measure gravitational waves in the millihertz range. They will complement ground-based detectors such as GEO600, aLIGO and Virgo, observing at higher frequencies in the audio range. Gravitational wave observatories will probe unknown domains – the “dark side of the universe” – in concert with other astronomical methods. One example is the formation, growth and merger of massive black holes. It will also be possible to test Einstein’s Theory of General Relativity and search for unknown physics