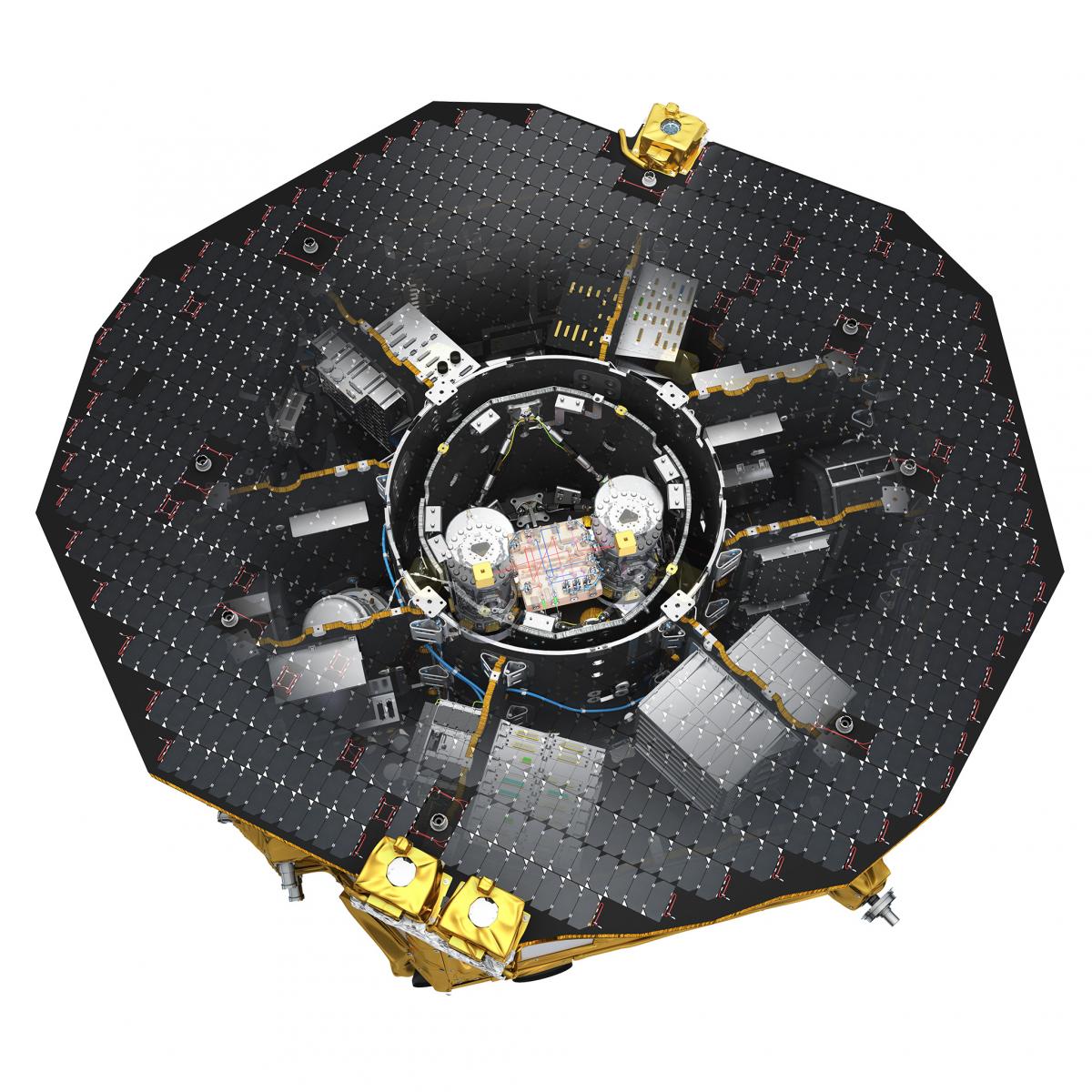 After completing a long series of tests on the spacecraft and payload, the ESA mission LISA Pathfinder has started its science mission. Over the next six months it will conduct hundreds of experiments to pave the way for future space-borne gravitational-wave observatories like LISA. Researchers from the Max Planck Institute for Gravitational Physics (Albert Einstein Institute) and the Institute for Gravitational Physics of Leibniz Universität Hannover are leading mission partners.

LISA Pathfinder is a technology demonstrator satellite mission, about 1.5 million kilometers from the Earth towards the Sun. There, mission scientists have now set up a space laboratory to study the perfect free fall of two cubic test masses. The team will use it to test technologies necessary for future space-borne gravitational-wave observatories.

“We are now just starting the second week of the LISA Pathfinder science operations. We are absolutely thrilled by how well our first set of experiments went,” says Prof. Karsten Danzmann, director at the Max Planck Institute for Gravitational Physics and director of the Institute for Gravitational Physics at Leibniz Universität Hannover, who also is the Co-Principal Investigator of the LISA Technology Package. “For the next weeks we have a tight schedule of experiments to run on the satellite, which will ultimately show that we can build a full-scale gravitational-wave observatory in space.”

Observatories such as LISA rely on placing test masses in perfect free fall, which are isolated from all external forces except gravity. The squeezing and stretching of space-time induced by passing gravitational waves will be detected by constantly monitoring the distances between two free falling test masses. These test masses will be placed in three satellites, separated by millions of kilometers. Lasers will be used to measure their distances.

LISA Pathfinder takes one of these so-called laser arms shrunk to 38 cm to fit inside the satellite. There, a pair of identical gold–platinum cubes measuring 46 mm each – is placed inside the spacecraft in vacuum chambers. Mission scientists are now verifying that the masses are truly moving under the effect of gravity alone. The construction of the precise optical measurement system used for this was led by scientists of the Max Planck and Leibniz Universität researchers in Hannover.

Even in space, far away from all disturbances, different internal and external forces are still influencing the cubes' motions. LISA Pathfinder monitors the motions and uses micro-Newton thrusters to always keep the spacecraft centered on one cube. Additionally, both test masses can be gently moved and controlled by applying electrostatic fields from special housings.

The perfect free fall
To understand how different forces act on the test masses and disturb their perfect free fall, the team will deliberately apply these forces to the masses and study their reaction. In one of these experiments the scientists will raise the temperature inside the test masses' vacuum chambers, heating up the few gas molecules left there to measure if this has any effect on the motion of the cubes. Similar tests can be performed by applying increasingly stronger magnetic or electric forces to the test masses, to assess their influence.

“Our aim is not only to reduce the impact of forces that we already know are disturbing the cubes, but also to learn more about the remaining effects that are 'hidden' in the noise,” says Karsten Danzmann.

Data analysis for LISA Pathfinder in Hannover
The scientific mission of LISA Pathfinder officially started last week, on 1 March, with a review of the commissioning period presented on 7 March. The science operations will last six months, split between 90 days for the LISA Technology Package, and 90 days for the Disturbance Reduction System, an additional experiment provided by NASA's Jet Propulsion Laboratory.

During the entire operations phase, Max Planck and Leibniz Universität researchers in Hannover are partners in the data analysis which plays a central role in extracting the crucial information from the science data. They have played a leading role in the development of the software use, too. The institute has set up an operations control room in Hannover to function as back-up for the control room at the European Space Operations Centre (ESOC) in Darmstadt and for in-depth studies of the data. Since an immediate data analysis is required for the configuration of follow-up experiments, scientist from the institute will also take part in the around-the-clock shifts at ESOC.