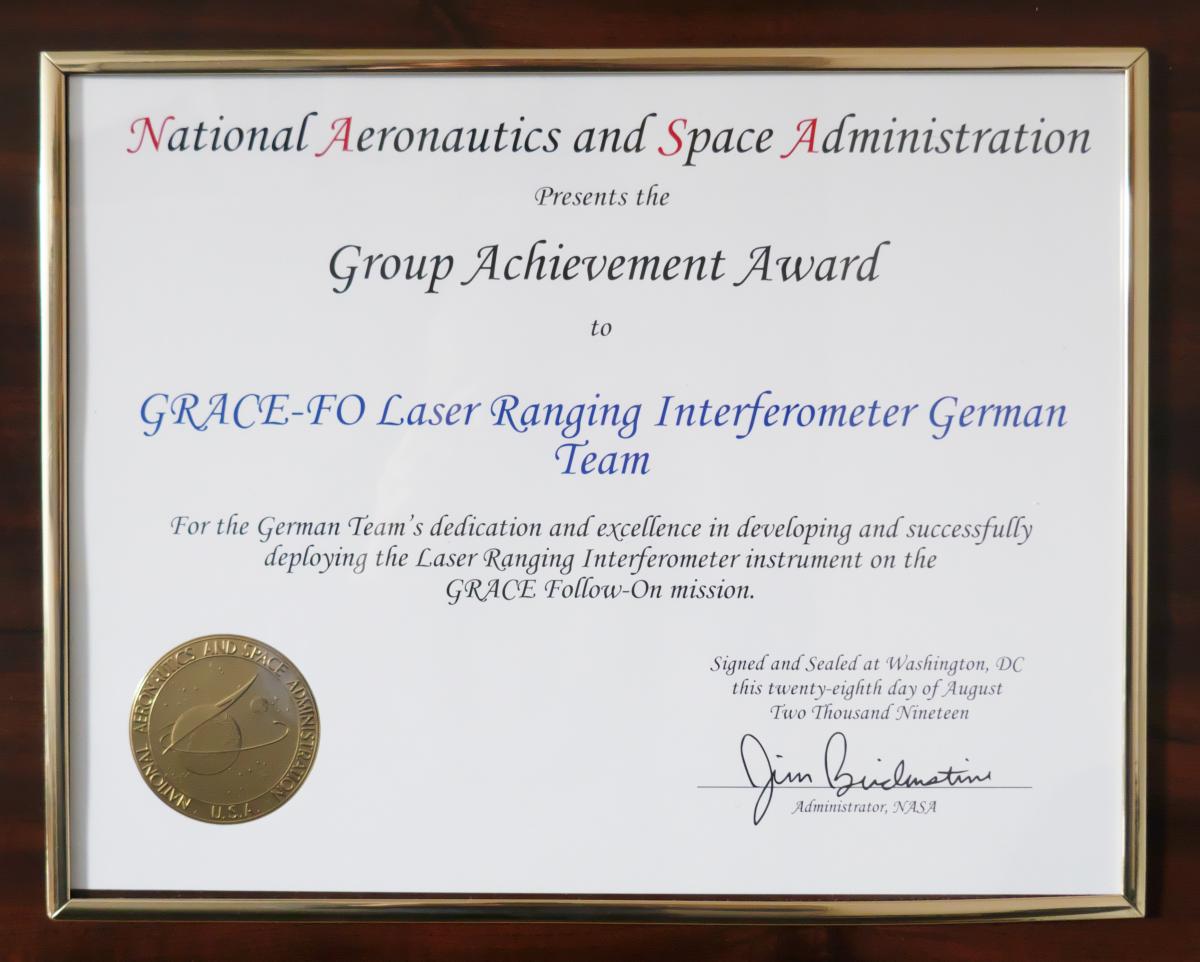 A group of 47 researchers in Germany received a NASA award for their teamwork on the novel and very successful Laser Ranging Interferometer on board the GRACE Follow-On satellite tandem. Among them are 13 researchers from the Max Planck Institute for Gravitational Physics (Albert Einstein Institute; AEI) and the Institute for Gravitational Physics at Leibniz Universität Hannover. The NASA Group Achievement Award was presented to the team at the Jet Propulsion Laboratory at the end of October for “dedication and excellence in developing and successfully deploying” the laser instrument on board the GRACE Follow-On mission.

“We are very pleased about this award from NASA,” says Prof. Gerhard Heinzel, leader of the Space Interferometry group at AEI Hannover. “The great success of the laser instrument is also due to the excellent cooperation within the German team of research and industry partners.”

The laser instrument is a cooperation between NASA and German partners, with the German contribution led by the AEI. In Germany, the instrument’s concept, its prototypes and technical specifications were done at the AEI. AEI researchers have been heavily involved in developing and testing the flight hardware. The development of the LRI is based on a longstanding partnership between AEI and NASA’s Jet Propulsion Laboratory.

An important milestone on the path to LISA
The Laser Ranging Interferometer on board GRACE Follow-On is the first laser interferometer to measure distance changes between two satellites in space. The gravitational-wave observatory LISA (Laser Interferometer Space Antenna) will use similar technology to measure tiny length changes over a distance of 2.5 million kilometres to observe low-frequency gravitational waves.

According to a recent decision by the ESA Ministerial Council, LISA could launch into space 2032 – two years earlier than planned so far.

Globally observing indicators of climate change with laser technology
The GRACE Follow-On satellite pair circles the Earth 490 kilometers above its surface. The satellites follow one another in a distance of 220 kilometers in a 90-minute orbit, which takes the satellites above the Earth’s poles. The inter-satellite distance varies over some hundreds of meters each orbit because of the flattening of the Earth. On top of these large changes are much smaller variations in the micrometer and nanometer range, caused by the local structure of Earth’s gravity field from mountain ranges, ice masses, bodies of ground water, and others.

Observing how these minuscule variations change over the course of months allows researchers to precisely detect the melting of ice sheets in Greenland and the Antarctic, rising sea levels, changing groundwater levels, droughts and floods, and to define the geoid, which is at the base of global height measurements. The novel Laser Ranging Interferometer technology could significantly increase the precision on future GRACE Follow-On like missions to help those missions provide more detailed measurements of Earth’s gravity field and its changes over time.

GRACE Follow-On
GRACE Follow-On is a joint project of NASA and German partners led by the GFZ German Research Centre for Geosciences. It is the improved successor to the successful GRACE mission which operated from 2002 to 2017.

The German contributions to the LRI include the entire optical system, consisting of a steering mirror, built by Hensoldt (previously Zeiss) in Oberkochen and the optical bench from SpaceTech GmbH in Immenstaad, opto-electronics from the German Aerospace Center (DLR) in Berlin-Adlershof, and electronic systems from Apcon AeroSpace & Defence in Neubiberg near Munich. SpaceTech GmbH is responsible for the industrial part of the entire German LRI contribution. The DLR Institute of Space Systems in Bremen developed and delivered calibration and testing instruments. Both satellites were built on behalf of NASA by Airbus in Friedrichshafen. Mission control for GRACE Follow-On is provided by the German Space Operations Centre (GSOC) in Oberpfaffenhofen near Munich under subcontract of GFZ.

The NASA Group Achievement Award
This prestigious NASA certificate is awarded to any combination of Government and/or non-Government individuals for an outstanding group accomplishment that has contributed substantially to NASA's mission.